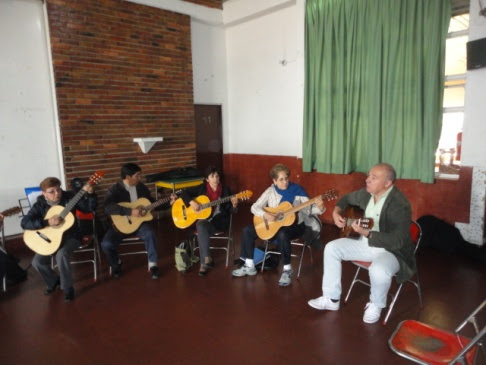 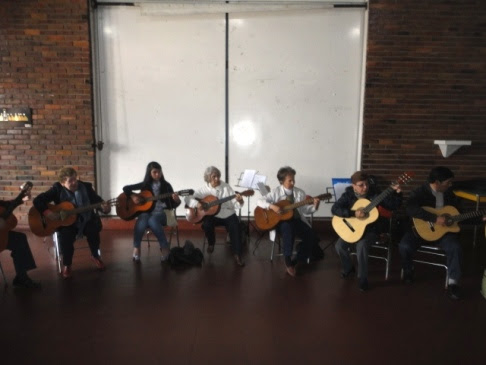 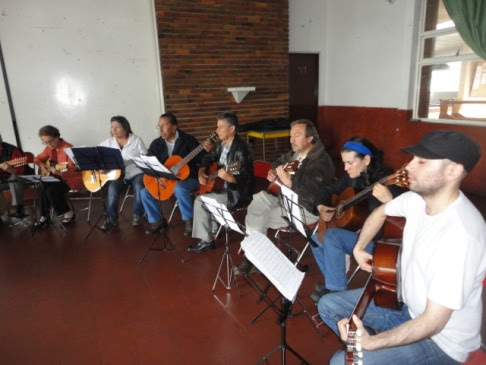 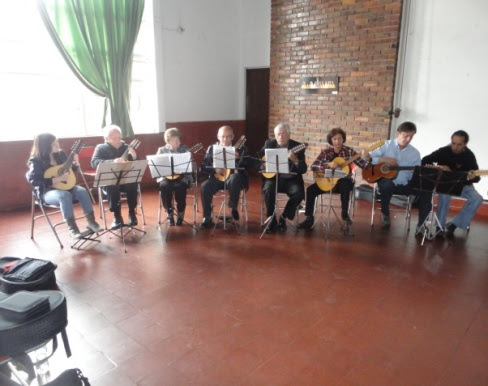 Test for a friend

My previous scrolling picture test seemed not to work as expected so, I'm trying a new one (see above)...
Posted by Oscar Ramirez G. at 3:10 PM No comments:

I already said I'm taking French classes this year. Classes take place in downtown Bogotá where there's convenient transportation by the Transmilenio buses; the last 2 months the bus stop in front of the place I take classes was closed for repairs, which forced me to take buseta, a small bus which usually rides packed with passengers and wastes almost 1 hour to go downtown from home, while buses from the Transmilenio system take you there in 35 minutes, saving big in transportation time. Fortunately, the closed station finally reopened today so, bye bye buseta! (funny fact by the way: Buseta in brazilian portuguese does NOT mean small bus, I warn you!)
Posted by Oscar Ramirez G. at 8:47 PM No comments:

I really want to fly to Medellin to enjoy the Feria de las Flores (Flower's Festival) but all my friends work and don't have time to spare as I do right now. I still have a couple days to plan something.
Posted by Oscar Ramirez G. at 7:14 PM No comments:

To buy or not to buy?

For the last 3-4 months, I've been thinking about buying this motorcycle. I love it and I would certainly save a lot in gas, tolls and parking fees but, problem is, car drivers in Colombia don't like (hate!) to share the road with bikes. That scares me a bit and has held me up from going ahead and make the move...
Posted by Oscar Ramirez G. at 6:56 PM No comments:

These months in Colombia are the peak season for tangerine crops. I love tangerine and I'm eating like there's no tomorrow. Season's price for one box (25 juicy units in average) is $2000 Colombian pesos (US$ 0,87; this comes to about 3.5 cents per unit, not bad huh?)
Posted by Oscar Ramirez G. at 8:33 PM No comments:

I know it's been a long time since my last posting but anyway, I'm finally back.

I've been quite busy as a student. When I began school this year I thought I was going to have enough free time to work or doing something else, but after a while I realized I was devoting most of my time to it. Right now I'm in the middle of a 2-week recess (the longest during the school year) and that's why I'm reporting back here.

Quite a lot has happened at school; I began in January and also in paralell I took up French as I had promised to myself; each level at the university lasts 2 months and 1 month for French. I have already completed 3 levels in telecomm management and 6 in French. Right now I'm also at the end of my 6th French course so I'm taking it easy for a couple of days. It's been hard at school but the courses have been interesting so far and the best part is I have seen good progress in my managerial skills as I intended when I took up the course, since as an engineer those were almost zero. There's also an interesting side effect after taking 4 Law courses: I'm discovering a cruel lawyer that was hiding inside me, since now I have recurring desires to sue people, even those who give me bad looks on the street, hehehe. Also interesting, I have the chance to study along with 31 people that come from the largest telecomm companies in Colombia, which has given me an insider's look at how the industry in Colombia is doing; they have shown interest in why I'm out of work and have made me a few offers already. If that continues, I think it's going to be easy to find a job after I finish school.

I have about a month to define my grad project; I hope I can find a company willing to sponsor my project soon.

In my scarce free time I have tried to attend a few parties in order to socialize and practice my hardly earned salsa moves too.

It's funny, after having worked non-stop since 1989, I'm starting to enjoy a lot my current student life... I thing I should enjoy it while it lasts before going back to work.

In my last posting I complained about not having gas at home and, sadly, 8 months later I'm still waiting for that to happen. It seems that my home address shows that I have gas installed from an error some idiot should had made while entering my neighbor's address; since they trust more their database than me, I haven't been able to convince them I don't have service yet. Unfortunately, we are subject to the speed and will of our latin american utilities monopolies; after almost 1 year back here I'm starting to get used to the idea.

Well, I already spoke my mind out a bit, I hope my next posting is not a year from now...
Posted by Oscar Ramirez G. at 7:56 PM No comments:

Another week, now in December. The rain has started to give us a break and I am really happy about it. That long rain season was becoming really annoying.

December started with a nice surprise: I was admitted to the University. I knew I had failed one of the exams (Finance) so they give me a chance to take the exam again in January. The exam's subject is Financial Management and I need to start studying that right now so I won't have too much time to party/vacation this December/January but the cause is good I hope.

News about the new house: I called the gas company and they promised me to investigate what is happening with my request to install the gas meter. I hope they pay some attention to it. I sincerely think they either are stupid or their employees are not motivated enough to work for the company: the moment they hook up the freaking meter, they will start to charge me for the stinky gas, so, why do they wait so long?? Same thing with the power company; they have to come to the house and replace a broken circuit braker to be able to start charging me. I am starting to think they are kind of masochistic; they must love to be called and eat a lot of swearing.

There's a French film festival going on now in Bogotá. I had heard about it but I didn't pay too much attention to it until today (I love movies but I have been also quite busy and my mind has not been exactly on free-time activities lately.) Finally, I went to watch one of the movies with a friend (she was really happy because she speaks french, while I had to read the captions.) The movie is called (free translation): Will it snow on Christmas day? and is about a french farmer who's got an "unofficial" wife and seven kids that he uses to treat as his personal farm slaves. The pace of the movie is a bit slow but the many misadventures suffered by the poor wife and kids keep you watching.

(I have a TV card installed on my PC and while I write this I'm watching the Discovery Channel; they are showing a docuentary about african lions. I just heard an amazing fact: the roar of the beast can be heard up to 8 kilometers away, wow. Sorry about this commercial.)

The bad news is about our lovely pet; the poor doggie is really sick. He's now 13 years old and he's got a weird illness that's making him unable to walk. He's hardly eating and uses to sit on a fixed place and not move for hours. I'm very concerned about it.

Today, my blogging experience starts. I was mainly motivated to start a blog by looking at my friend Rafa's one. Surely his and his wife Ivannia's lives are more exciting than mine but, anyway, I'll try to keep up with the Joneses.

Today I left for my new house early in the morning (7 a.m. considering it's Saturday). This new house I bought is a 10-min. bike ride from my mom's house, where I live now. The house is empty and I plan to bring my furniture and stuff only after leaving it on a "livable" condition. Since it's brand-new, I need to look for new floors, wall paint, kitchen cabinets, blinds, etc. for it.

What is so exciting about this house anyway? To make a long story short, I came back to Colombia from the U.S. only three months ago, and I am trying to re-build a life here after almost five years spent in Washington, D.C.

Back to the house, today it's the fourth time I am called there to wait for the natural gas guys to come to install a gas meter (natural gas, LNG, is a public utility distributed to homes in Colombia, similarly as water and electricity.) I was there from 7 a.m. to 1 p.m. and nobody showed up. I have to say I am getting used to it again: unfortunately in this country, very few businesses and people are respectful of your time and they use to make appointments and commitments they never honor and, since some of them are the sole providers of a product, they do what they want and show up when they want. Generally speaking, customer service at most utility companies sucks.

My stomach forced me to get back home and have lunch, then I sat down to write this not so great first entry in my blog. Well, I tried to make it not too long the first time.